Local to Broward Country, Florida, Saving Herald's song "Breathe" became the definition and forefront to create a music video bundled with artwork and media focal points. They are a group that expresses a joyous, grungy, and authentic styling to their alternative rock music branding. This bundle of four composes a vintage team with the energy of drums, guitar, and talented vocals. Our team powered through the challenges to make content when hopes with the band fell short.

Saving Herald has expressed themselves as a country-traveling trademark of sorts, the group that sticks together through it all. They have opened for other larger bands throughout Florida and California, such as the band The Eiffels in Los Angeles. Their events have been captured on live cameras, and afterward, published on social media. Never before have they produced a full-length music video. Our tailored video is the original foundation for their faces on the internet and introduced a top-notch quality product with their name on the listing. They take influences from historical notes such as blink-182, Led Zeppelin, and Rex Orange County. A music video in their liking was essential to make sure we kept with the trends and representative preferences for how they would like to be perceived, and Gianna and I worked diligently to respect that, however long it was going to take.

Creating the artwork was our first step in examining the techniques in which rock bands present themselves. The emo outfits, costumes, unique sets of warehouses, and dirty alleyways; all gave grunge of pains, traumas, and personal expressions that we discovered during our research. The yelling, ripping your lungs into the air during the solos! All of it was the rebel saying, "I'll do it just 'cause I can." Our artwork was then chosen to be a man smoking a cigarette to represent hardships and relationship clashes as he was partially submerged in water. This made references to the lyrical segments in the song too. When conceptualizing the music video, we originally wanted to blend styles, cut between the band's music performance with a short story. However, due to the limited time and resources, issues of COVID, length of the song, location, and making sense of the lyrics, we decided to focus solely on the band's presentation and performance. It hit closer to home for the song, and I had already learned my lesson during last year's classes - I often spread my ideas too thin and too broad. Mrs. Stoklosa would advise me to keep it down to one idea and execute that diligently. The advice was taken! We discovered a rundown, foreign, abandoned home near our city that fit the rock theme perfectly, so we set up shop in the living room with multiple camera angles to create a dynamic cut. We took advantage of the scenery and used most rooms as sets for the solo segments, such as essential guitar moments or drum cues. This worked fantastically, as now we had four shots of the group together and takes from each member’s solo, all composed into nine tracks to edit however we liked. The set's mise en scene perfectly expressed the "vibes" we all thought nailed the bull's eye. The rundown building and broken everything around made the perfect grunge/adventure attitude.

These themes of rebellious independence and hard-core fun were the main goal to fit the genre of music. Because the young adult and teenage group in first world countries is usually the primary target demographic for this music style, we wanted to connect to these people through popular means of communication. Twitter. We gave the account the appropriate banner, taken from the true Facebook account they own. One struggle was communicating with the band efficiently. Despite having a direct group chat with them on Whatsapp, warranting a response was almost impossible most of the time. We wanted to do so much more with their branding, but they had other things to care about—a disappointing challenge, but not a destroyer. We had to create our own Twitter and could not depend on them to migrate content to their original pages. The Twitter page was used to spread the song's release on a multitude of music platforms such as Spotify, iTunes, and Amazon Music. Later, it was used to publish an embedded player for the music video once it was on Youtube and for the vinyl artwork created and printed. Youtube has features in which you can tag and categorize your uploads to match as best it can with certain themes people click on, and it takes advantage of Youtube's user experience algorithms.

Looking into other music videos of similar music groups was essential when we began outlining concepts for the Saving Herald video. Linkin Park's Numb video couldn't be a better frame of reference. There's a brief story following a girl's life of isolation and self-reflection combed in with scenes of the band's performance of the song. They shot their performance within a garage/man-cave/church scene to deliver the goth and dark themes in the video. Nice flavors of layering and shallow-depth of field also contribute lots to the shot sequence. The story seems to also create a connection between the lead performer and the girl character, and she visits the now-empty band room at the end of the video. Context about relationships emphasized in the lyrical parts such as "Can't you see that you're smothering me, Holding too tightly, afraid to lose control?" also have importance. Once we saw how the bands were set up after looking at other videos from groups such as These Days by Wallows taught us how to orient the instruments on set.

When we had Mrs. Stoklosa review our draft for the final cut, she recommended we, rather than include a cinematic style opening for the credits and title, we implement a traditional MTV minimalist graphic in the bottom corner for the beginning moments. We also noticed this in other band videos and made the correction to best match the characteristic of the genre and the music industry's rock category. The video was a challenge to set up and execute and is by far the largest group I've had to work within my experiences.

Components of the Project

Gianna Ubiera, and I, Dean Milan, are pleased to present the finale of our Music Promotion package, which was Option 1 of 4 for our AICE Media Studies A level Portfolio project. Here contains all the components of the music video, social media page, and other content we created for this project.

Saving Herald is a local rock band composed of students from our own high school, Cypress Bay High, and we had the opportunity to work together to create this music video. Their styling of a new age of indie rock and alternative music gave us an open door for ideas. We went the extra mile to see what we could do, and it came out with a bang. We hope you enjoy, and thank you for reading.

This marks the end of my high school adventures.

Music Video (including behind the scenes clips)

Some fixes and clean ups!

Even though the video airs on Friday, the Saving Herald group definitely wanted to see a copy of the latest edit, to see how their performance would show to the public. There were actually quite a few corrections, but more actually, alterations that some of them wanted done. Did they still like the video? Of course, and I made the most of their requests and the video ended up being a more complete and whole timeline. Everyone wins! We were able to include more diversity in shots and key moments from the guitar, drum, and vocal solos. 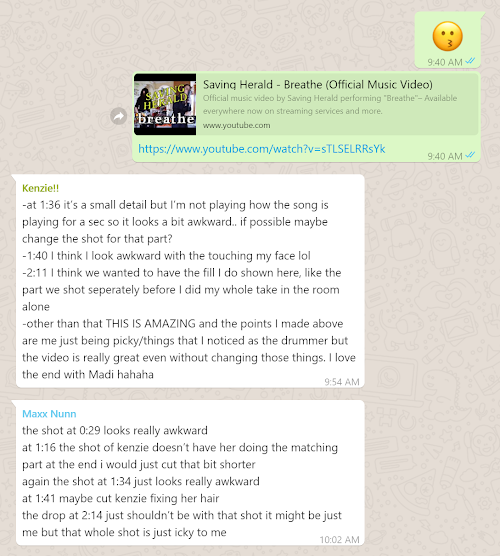 I took the new final version, reuploaded to YouTube, set the same schedule time, then deleted the first version. So we're still all set for later this week! Here's a look at the upload page, all ready to go. 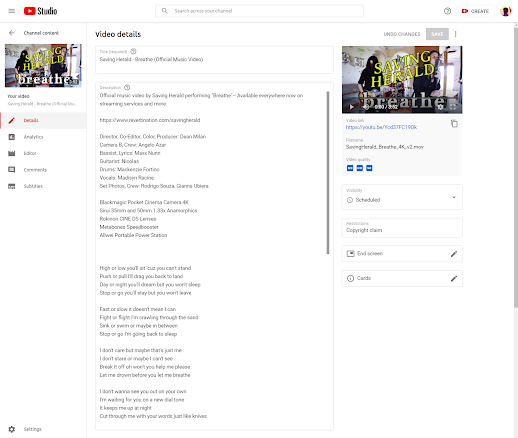 So much has been happening the last few days, but I have great news! We came to the conclusion that adding extra cinematography to our video wouldn't make sense for this style of song, so after taking Stoklosa's advice, and analyzing our own edit further, we decided to keep it as it. We then took the footage we already had and heavily cleaned it up. The primary goal was to keep the footage flowing and moving nicely so that clips wouldn't drag on for too long, to create a fully engaging video.

We were happy with what we created, and scheduled it to go public on YouTube this Friday at 3pm! We also scheduled many posts for the Twitter account leading up to the video's release later this week. 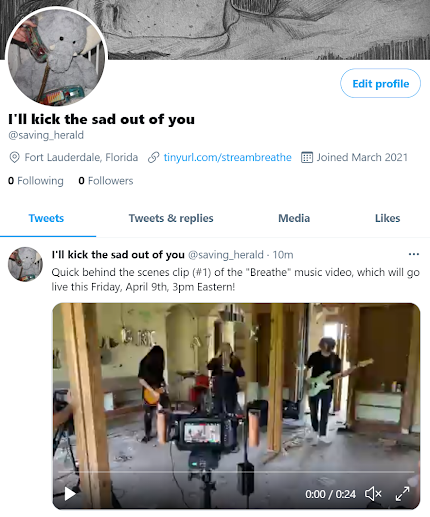 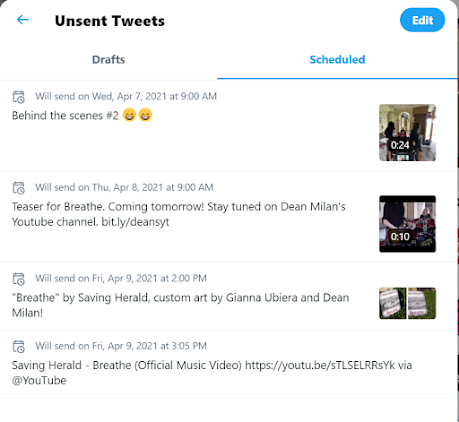 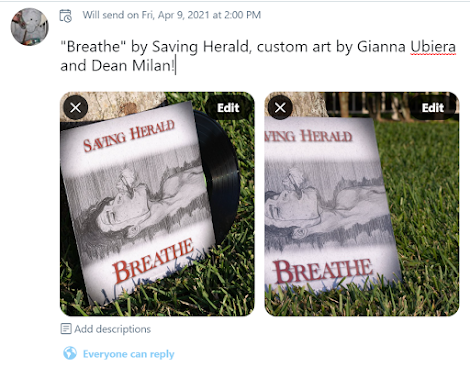 The twitter is scheduled, the posts are done, the video is up, last goal is to complete our CR review and get some feedback on that. Cheers!
Posted by Dean Milan at 8:08:00 AM No comments: